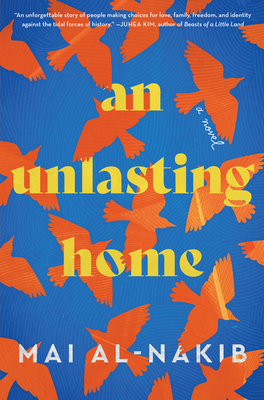 Sara had believed that she left Kuwait for good, but after her mothers death, she returned to her home country to run her mother’s bookshop and teach at Kuwait University. After she is accused of blasphemy due to the content of her lessons and faces potential execution, she reflects on the complicated relationship she has with the country she was raised in. Between the pages of Sara’s story is that of multiple other women from her family: her two grandmothers, her birth mother, and the woman who left her whole life behind to raise Sara and her brother. Although this story covers a wide breadth of foreign history, don't be intimidated! The lives of these incredible women are told with absorbing intimacy that will immerse you from the very start.

"So fresh and unsettling that it will enchant you from the first page and linger for days after reading...Its epic family saga style echoes that of Hala Alyan’s Salt Houses and The Arsonists’ City, Ayad Akhtar’s Homeland Elegies, and Min Jin Lee’s Pachinko." -- Los Angeles Review of Books

In 2013, Sara is a philosophy professor at Kuwait University, having returned to Kuwait from Berkeley in the wake of her mother’s sudden death eleven years earlier. Her main companions are her grandmother’s talking parrot, Bebe Mitu; the family cook, Aasif; and Maria, her childhood ayah and the one person who has always been there for her. Sara’s relationship with Kuwait is complicated; it is a country she always thought she would leave, and a country she recognizes less and less, and yet a certain inertia keeps her there. But when teaching Nietzsche in her Intro to Philosophy course leads to an accusation of blasphemy, which carries with it the threat of execution, Sara realizes she must reconcile her feelings and her place in the world once and for all.

Interspersed with Sara’s narrative are the stories of her grandmothers: beautiful and stubborn Yasmine, who marries the son of the Pasha of Basra and lives to regret it, and Lulwa, born poor in the old town of Kuwait, swept off her feet to an estate in India by the son of a successful merchant family; and her two mothers: Noura, who dreams of building a life in America and helping to shape its Mid-East policies, and Maria, who leaves her own children behind in Pune to raise Sara and her brother Karim and, in so doing, transforms many lives.

Ranging from the 1920s to the near present, An Unlasting Home traces Kuwait’s rise from a pearl-diving backwater to its reign as a thriving cosmopolitan city to the aftermath of the Iraqi invasion. At once intimate and sweeping, personal and political, it is an unforgettable epic and a spellbinding family saga.

Mai Al-Nakib was born in Kuwait and spent the first six years of her life in London, Edinburgh, and St. Louis, Missouri. She holds a PhD in English from Brown University and is an associate professor of English and comparative literature at Kuwait University. Her short story collection, The Hidden Light of Objects, was published by Bloomsbury Qatar in 2014. It won the Edinburgh International Book Festival’s 2014 First Book Award. Her stories and essays have been widely published, most recently in World Literature Today and The LA Review of Books.

“This sweeping debut novel from Al-Nakib (after the collection The Hidden Light of Objects) imagines an alternate reality for contemporary Kuwait in which blasphemy is made a capital crime…Al-Nakib renders each family member with care and exacting observation.” — Publishers Weekly (starred review)

"So fresh and unsettling that it will enchant you from the first page and linger for days after reading. ... Deftly written. ... Its epic family saga style echoes that of Hala Alyan’s Salt Houses and The Arsonists’ City, Ayad Akhtar’s Homeland Elegies, and Min Jin Lee’s Pachinko." — Los Angeles Review of Books

“Deeply enchanting, at times suspenseful, and always engaging, An Unlasting Home is filled with tales of women’s lives and their intersection with the often volatile and unpredictable currents of nations, war, and political history. Mai Al-Nakib’s storyteller’s voice is fresh and original—her book grabbed me from the outset and kept me entranced to the last page.”  — Diana Abu-Jaber, author of Fencing with the King and Crescent

“An Unlasting Home is an unforgettable story of people making choices for love, family, freedom, and identity against the tidal forces of history in the Arab region. Shimmering with poetic prose, and as pressingly real as the white heat of August in Baghdad, this poignant debut will keep you in its thrall.” — Juhea Kim, author of Beasts of a Little Land

"A spellbinding family history unfolds as a Kuwaiti woman goes on trial for blasphemy in a world gone mad. Deftly written, structurally brilliant, Mai Al-Nakib’s An Unlasting Home is a lasting novel that splits open time, leaps across continents, and creates the sort of characters we carry forward into our hearts and lives. I absolutely loved this book." — A. Manette Ansay

"Grapples profoundly with the limits of individual choice and the hold exerted by a person’s homeland...accomplished and searing." — Publishers Weekly (starred review)

"Mai Al-Nakib lyrically explores themes of homeland, tradition and agency as she relates the stories of generations of Arab women across Kuwait, the US, Iraq, India and Lebanon." — Ms. magazine

"A sweeping novel that will stick with readers for a long time." — Debutiful

"An ambitious family epic with a historical sweep, an elegy to grandmothers and mothers who were forced from their original homes by personal or political circumstances in the Middle East to build nests elsewhere." — World Literature Today

“Penetrating insight and such compressed lyricism that at times her prose seems to border on poetry. A densely imagined and beautifully written debut.” — Sydney Morning Herald on The Hidden Light of Objects

“The Hidden Light of Objects marks the emergence of an author already confident in her craft and her ability to give voice to the emotions and yearnings of her characters.” — New Internationalist

“The old world and the new. The strife in the Gulf, once peaceful and reflective. East and West, Arabic and English, the poetry of the heart, the eye of the hawk; all these elements produce the lustrous pearls of Mai Al-Nakib’s short stories.” — Hanan al-Shaykh, author of Beirut Blues, on The Hidden Light of Objects

“The Hidden Light of Objects brings forth both the light and the shadows of the contemporary Middle East in clean-edged prose that startles us, not with sudden violence or polemic, but with the ineluctable force of human desire. Kuwait itself becomes a character, full of contradictions, in this multifaceted set of stories and vignettes. Superb.” — Lucy Ferriss, author of The Lost Daughter

This feature require that you enable JavaScript in your browser.
END_OF_DOCUMENT_TOKEN_TO_BE_REPLACED

This feature require that you enable JavaScript in your browser.
END_OF_DOCUMENT_TOKEN_TO_BE_REPLACED

This feature require that you enable JavaScript in your browser.
END_OF_DOCUMENT_TOKEN_TO_BE_REPLACED