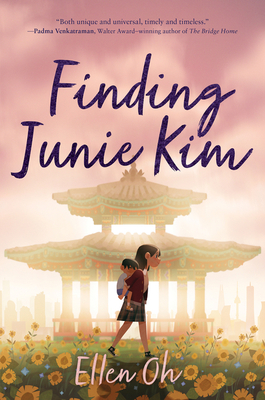 Like any middle schooler, Junie Kim is trying her best to fit in. That’s no small task when she’s one of the only Asian students in her school, and a classmate emboldened by the 2016 election kicks off the first day of school with racist graffiti on the gym wall. Junie’s friends are called to action, but Junie isn’t sure she has the voice to speak out against racism, or if they could even win the fight. In the meantime, Junie begins an oral history project for class and interviews her grandparents who survived the Korean War. As Junie learns how dangerous ideology can be, she finds her own voice. Finding Junie Kim is about more than Junie finding her voice though, it’s about all of us using our voice as a shield, rather than our silence as a weapon.

For fans of Inside Out and Back Again and Amina’s Voice comes a breathtaking story of family, hope, and survival from Ellen Oh, cofounder of We Need Diverse Books. When Junie Kim is faced with middle school racism, she learns of her grandparents’ extraordinary strength and finds her voice. Inspired by her mother’s real-life experiences during the Korean War, Oh’s characters are real and riveting.

“Both unique and universal, timely and timeless.” —Padma Venkatraman, Walter Award-winning author of The Bridge Home

"A moving story that highlights how to find courage in the face of unspeakable hardship." —Hena Khan, award-winning author of Amina’s Voice

"Junie discovers where she comes from and gains the courage to make a difference in the future." —Wendy Wan-Long Shang, award-winning author of The Great Wall of Lucy Wu

Junie Kim just wants to fit in. So she keeps her head down and tries not to draw attention to herself. But when racist graffiti appears at her middle school, Junie must decide between staying silent or speaking out.

Then Junie’s history teacher assigns a project and Junie decides to interview her grandparents, learning about their unbelievable experiences as kids during the Korean War. Junie comes to admire her grandma’s fierce determination to overcome impossible odds, and her grandpa’s unwavering compassion during wartime. And as racism becomes more pervasive at school, Junie taps into the strength of her ancestors and finds the courage to do what is right.

Finding Junie Kim is a reminder that within all of us lies the power to overcome hardship and emerge triumphant.

A Bank Street Best Children’s Book of the Year

is the cofounder of We Need Diverse Books and author of the award-winning Spirit Hunters series for middle grade readers and the Prophecy trilogy (Prophecy, Warrior, and King) for young adults. Originally from New York City, Ellen is a former adjunct college instructor and lawyer with an insatiable curiosity for ancient Asian history. Ellen lives in Bethesda, Maryland, with her husband and three children and has yet to satisfy her quest for a decent bagel. You can visit her online at www.ellenoh.com.

“An obvious labor of love, shedding light on both present-day problems and an often-overlooked war, tackling extremely challenging subjects like racism, depression, suicidal ideation, death, and even gruesome war crimes. But there is also fierce familial love, supportive friendship, and an undercurrent of hope that buoys Junie in her worst times and helps her endure and grow. Junie’s difficult journey is certainly one worth taking.” — Booklist (starred review)

“She seamlessly provides insight into Korean history and culture for the unintroduced and captures the human condition during wartime through frank portrayals of Junie’s modern-day struggles…Oh’s powerful novel sheds light on the devastating effect racism can have, and tells a history often overlooked.” — School Library Journal (starred review)

“This novel is firmly rooted in real-life events…which gives the book an urgency that speaks to this moment of anti-Asian intolerance. Like Linda Sue Park’s “A Long Walk to Water” and Alan Gratz’s “Refugee,” it will help young readers understand the unfathomable tragedy of being a child trapped in war and also the imperative of never giving up hope — of enduring.” — New York Times Book Review

"An intergenerational tale that highlights a girl’s growing confidence and awareness." — Kirkus Reviews

“Oh conveys the legacy of bravery, tenderness, and forgiveness alongside the fallout of intergenerational trauma in a complex novel that touches on gender discrimination and racism, mental health, and imperialism and civil war…Junie’s healthy and inclusive family dynamic contributes warmth and hopefulness, and her grandparents’ backstories and personal integrity in the face of hardship are thoughtfully drawn.” — Publishers Weekly

“Filled with unforgettable characters, this profoundly moving story about a girl's search for self is at once both unique and universal, timely and timeless. A book that should be on every shelf.”  — Padma Venkatraman, Walter Award-winning author of The Bridge Home

“Any reader who has been fortunate enough to hear stories from their grandparents will recognize the power of Junie's experiences. By listening to her grandparents talk about their choices and bravery during the Korean War, Junie discovers part of where she comes from, and gains the courage to make a difference in the future.” — Wendy Wan-Long Shang, award-winning author of The Great Wall of Lucy Wu

"A beautifully moving story that cleverly spans generations and continents and highlights how to find courage and resilience in the face of unspeakable hardship. Junie Kim is a wonderful, thoughtful protagonist who grows as she learns hard truths about the devasting Korean War, about herself and how she relates to challenges in the world today, and about the power of friendship and family." — Hena Khan, Award-winning author of Amina’s Voice

This feature require that you enable JavaScript in your browser.
END_OF_DOCUMENT_TOKEN_TO_BE_REPLACED

This feature require that you enable JavaScript in your browser.
END_OF_DOCUMENT_TOKEN_TO_BE_REPLACED

This feature require that you enable JavaScript in your browser.
END_OF_DOCUMENT_TOKEN_TO_BE_REPLACED