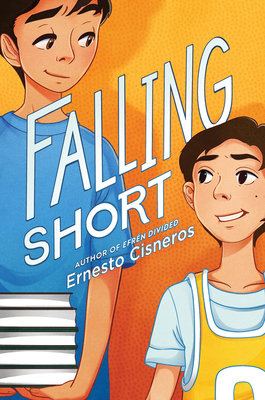 Ernesto Cisneros, Pura Belpré Award-winning author of Efrén Divided, is back with a hilarious and heartfelt novel about two best friends who must rely on each other in unexpected ways. A great next pick for readers who loved Ghost by Jason Reynolds or The First Rule of Punk by Celia C. Pérez.

Isaac and Marco already know sixth grade is going to change their lives. But it won’t change things at home—not without each other’s help.

This year, star basketball player Isaac plans on finally keeping up with his schoolwork. Better grades will surely stop Isaac’s parents from arguing all the time. Meanwhile, straight-A Marco vows on finally winning his father’s approval by earning a spot on the school’s basketball team.

But will their friendship and support for each other be enough to keep the two boys from falling short?

Ernesto Cisneros was born and raised in Santa Ana, California, where he still teaches. Efrén Divided is his first book. He holds an English degree from the University of California, Irvine; a teaching credential from California State University, Long Beach; as well as a master of fine arts in creative writing from National University. As an author, he believes in providing today’s youth with an honest depiction of characters with whom they can identify. The real world is filled with amazing people with diverse backgrounds and perspectives. His work strives to ref lect that. You can visit him online at www.ernestocisneros.com.

"Cisneros always writes characters full of foibles and humor and human warmth, and he really knows his basketball.” — Carlos Hernandez, Pura Belpré-winning author of Sal and Gabi Break the Universe

"With characters so true to life that they practically jump off the page, Falling Short is the perfect balance of humor and heart. If books were basketball, author Ernesto Cisneros just made a slam dunk." — Sarah Scheerger, author of Operation Frog Effect

"At every turn, Isaac and Marco support each other in this affirming story of basketball, middle school, friendship, and family, and choosing kindness and determination over easy cowardice or cruelty." — School Library Journal (starred review)

"Told through animated alternating first-person chapters, Cisneros’s story not only captures the anxiety—and at times, humor—of trying to measure up to expectations, it also tackles delicate subject matter, such as parental absence and alcohol reliance, with profound sensitivity and nuance. A narrative slam dunk for fans of Donna Barba Higuera and Meg Medina." — Publishers Weekly (starred review)

"In this novel told through the alternating points of view of both protagonists, readers will closely follow the struggles and insecurities both characters experience while also observing a beautiful and endearing friendship. Cisneros has once again written an inspiring story that will have an immense emotional effect on all who read it." — Booklist

This feature require that you enable JavaScript in your browser.
END_OF_DOCUMENT_TOKEN_TO_BE_REPLACED

This feature require that you enable JavaScript in your browser.
END_OF_DOCUMENT_TOKEN_TO_BE_REPLACED

This feature require that you enable JavaScript in your browser.
END_OF_DOCUMENT_TOKEN_TO_BE_REPLACED