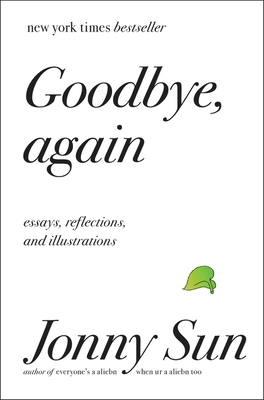 Who knew such meaning could be found in houseplants and scrambled eggs? In this collection of essays, short stories, and pen drawings, Sun brings new meaning to even the seemingly mundane and reveals his deeply personal experiences with anxiety, depression, and just being human. This book is for anyone who has ever felt lost in life; you are not alone, and will surely appreciate Sun’s raw honesty. Hilarious, heartbreaking, and just a tad hopeful, this book will leave you feeling sentimental and perhaps a bit less lonely.

“Truly, there's no shame in taking a break from books during the pandemic. But if you're feeling ready to reach out, try starting with Goodbye, Again. Take my word for it — let Jonny Sun into your life.”---Janet W. Lee, NPR

The wonderfully original author of Everyone's a Aliebn When Ur a Aliebn Too gives us a collection of touching and hilarious personal essays, stories, poems—accompanied by his trademark illustrations—covering topics such as mental health, happiness, and what it means to belong.

Jonny Sun is back with a collection of essays and other writings in his unique, funny, and heartfelt style. The pieces range from long meditations on topics like loneliness and being an outsider, to short humor pieces, conversations, and memorable one-liners.

Jonny's honest writings about his struggles with feeling productive, as well as his difficulties with anxiety and depression will connect deeply with his fans as well as anyone attempting to create in our chaotic world.

It also features a recipe for scrambled eggs that might make you cry.

Jonny Sun is the best-selling author and illustrator of everyone’s a aliebn when ur a aliebn too and the illustrator of Gmorning, Gnight! by Lin-Manuel Miranda. He was a writer for the Emmy-nominated sixth season of the Netflix Original Series BoJack Horseman, and is currently writing a movie, a new book, and multiple other projects. As a doctoral candidate at MIT and a creative researcher at the Harvard metaLAB, he studies social media, virtual place, and online community. He has a master’s degree in architecture from Yale and a bachelor’s degree in engineering from the University of Toronto. TIME Magazine named him one of the 25 Most Influential People on the Internet of 2017, and in 2019, he was named to the Forbes 30 Under 30 list, and gave a TED Talk that has been viewed online over 3 million times.

“There's something in the way Jonny Sun tells stories that makes you feel like he can see right through you. No matter the medium, he speaks directly to readers, inviting us to intimate conversations on loneliness, belonging and burnout. Honest and opinionated, Sun feels like your friend…every essay in Goodbye, Again is peppered with nuances informed by his constant moves, self-imposed expectations and bittersweet goodbyes, recognizable at first sight to another third culture kid in America. Take my word for it — let Jonny Sun into your life.” — NPR

“Sun’s collection is an almost too-perfect companion to the present anxiety, exhaustion and loneliness wrought by the pandemic. . . .Through essays and minimalist drawings that resemble wood cutouts, Sun begins to re-evaluate his relationship to the world, and “this constant voice in my head telling me that my own rest and recovery and catharsis were not valuable to anybody,” including himself. Amid our fast-paced and distracted culture, it is oddly calming to read these obsessive, but also quiet and tender, dispatches from a mind overwhelmed by guilt and worry: over how often to water plants or call friends, how to properly scramble eggs or talk at parties, how not to be so alone.” — New York Times Book Review

“Offers insight into the workings of an exceptionally busy, productive mind as well as the price of living in a hypercompetitive society . . . A quietly provocative collection.” — Kirkus Reviews

“This poetic, humorous, and heartfelt collection will have readers nodding along, laughing, and maybe even crying, but more than anything they will be engrossed and craving more. Similar to Sun’s previous work, this is another standout.” — Library Journal (starred review)

“Captivating and immersive  . . .To spend time with this book is to spend time in the private world of a creative, sensitive person who finds life inviting, beautiful and rich, but also overwhelming, scary and exhausting." — BookPage, Starred Review

"Goodbye, Again is the very best book of Sun’s early career. Consisting of mostly short bursts of inspiration, introspection, and hopeful observations, the book is exactly what we all need right now. Easy to pick up, flip through, and almost always find the very words you need to hear in that very moment, while also being meaty enough to sit with and read in longer bursts, Goodbye, Again is a joyful look at everyday life from one of literature’s most compassionate and well-rounded minds. It is, in a word, fantastic." — Shondaland

This feature require that you enable JavaScript in your browser.
END_OF_DOCUMENT_TOKEN_TO_BE_REPLACED

This feature require that you enable JavaScript in your browser.
END_OF_DOCUMENT_TOKEN_TO_BE_REPLACED

This feature require that you enable JavaScript in your browser.
END_OF_DOCUMENT_TOKEN_TO_BE_REPLACED