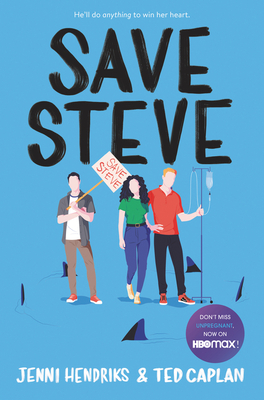 By Jenni Hendriks, Ted Caplan
$17.99
On Our Shelves Now

Cam is in love with Kaia. She is smart, beautiful, determined, and a passionate activist. The only problem is … she is dating Steve Stevenson. Steve is everything Cam isn’t- a jock, a jerk, and the most popular guy in high school. In other words, Cam is screwed. To make matters worse, Steve is diagnosed with cancer. Cam makes perhaps the biggest mistake of his life and offers to help Kaia raise money for Steve’s cancer treatments. Can Cam prove to Kaia that he is the guy for her? Or will Steve succeed in humiliating him and prove, once and for all,  that Cam is a loser. Stay tuned for shark tanks, bee beards, and diaper scandals. Things are about to get REAL.

"This book is packed with humor. Every character is well developed and has their complexities.” —School Library Journal

Steve Stevenson is a jerk. That might not be a cool thing to say about someone with cancer, but it’s true. Yeah, he throws legendary parties and is the most popular guy in school, but he also loves humiliating pranks and Cardi B, and he doesn’t recycle. Worst of all, he’s dating Kaia—the girl of nice guy Cam’s dreams.

But when a desperate Kaia asks Cam to help her raise money to pay for Steve’s experimental treatment, Cam offers to organize the biggest, most viral fundraising campaign. Maybe then Kaia will finally see Cam as the perfect, thoughtful, altruistic, good guy for her.

But Steve’s no fool. He’s totally on to Cam’s plan. And to stop him from stealing his girlfriend, he’s going to do whatever it takes to make Cam’s life as miserable as his own.

From Jenni Hendriks and Ted Caplan, authors of Unpregnant, comes a quirky, funny story about living up to other people’s expectations and what it really means to do the right thing.

Jenni Hendriks’s mom often complained she was “a real smart**s,” so she decided to make a career out of it. She moved to Hollywood and worked her way from coffee-fetcher to writer for the television series How I Met Your Mother. She is also a cartoonist whose feminist-inspired works have been published in Ms. magazine. A film school graduate, she knows how to rack focus and wrangle a cable and can tell you what a best boy does.

Ted Caplan has been working in the film industry for over twenty years as a writer, sound designer, and music editor. He has helped craft the soundtracks to many high-profile projects, such as The Maze Runner, Logan, both Deadpool films, and The Hate U Give. He is also the screenwriter of Love Sonia, a feature film about international sex trafficking from the producers of Life of Pi and Slumdog Millionaire.

"This book is packed with humor...every character is well developed and has their complexities."
— School Library Journal

This feature require that you enable JavaScript in your browser.
END_OF_DOCUMENT_TOKEN_TO_BE_REPLACED

This feature require that you enable JavaScript in your browser.
END_OF_DOCUMENT_TOKEN_TO_BE_REPLACED

This feature require that you enable JavaScript in your browser.
END_OF_DOCUMENT_TOKEN_TO_BE_REPLACED