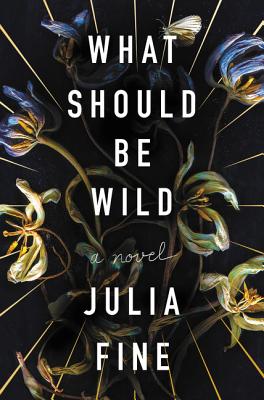 This modern fairytale is delightfully creepy and utterly unique. What Should Be Wild is a dark humorous novel that follows the story of Maisie, a girl born with the ability to kill or resurrect life with the slightest touch. Raised by her meticulous father in her late mother’s manor, Maisie longs to be a part of the lives surrounding her, and suppresses her own curse to keep things in their natural order. Her loneliness is palpable, her world extending as far as the mysterious wood encompassing her home. These boundaries are broken when her father suddenly disappears, and to save him Maisie must embrace the wild that is both around her, and inside her. The stunning prose builds a magically realistic world that will pull you in and leave you spinning from the haunting conclusion.

“Delightful and darkly magical. Julia Fine has written a beautiful modern myth, a coming-of-age story for a girl with a worrisome power over life and death. I loved it.”  —Audrey Niffenegger, author of The Time Traveler’s Wife and Her Fearful Symmetry

In this darkly funny, striking debut, a highly unusual young woman must venture into the woods at the edge of her home to remove a curse that has plagued the women in her family for millennia—an utterly original novel with all the mesmerizing power of The Tiger’s Wife, The Snow Child, and Swamplandia!

Cursed. Maisie Cothay has never known the feel of human flesh: born with the power to kill or resurrect at her slightest touch, she has spent her childhood sequestered in her family’s manor at the edge of a mysterious forest. Maisie’s father, an anthropologist who sees her as more experiment than daughter, has warned Maisie not to venture into the wood. Locals talk of men disappearing within, emerging with addled minds and strange stories. What he does not tell Maisie is that for over a millennium her female ancestors have also vanished into the wood, never to emerge—for she is descended from a long line of cursed women.

But one day Maisie’s father disappears, and Maisie must venture beyond the walls of her carefully constructed life to find him. Away from her home and the wood for the very first time, she encounters a strange world filled with wonder and deception. Yet the farther she strays, the more the wood calls her home. For only there can Maisie finally reckon with her power and come to understand the wildest parts of herself.

Julia Fine is a graduate of Columbia College Chicago’s MFA program. She teaches writing in Chicago, where she lives with her husband and son.

“Delightful and darkly magical. Julia Fine has written a beautiful modern myth, a coming-of-age story for a girl with a worrisome power over life and death. I loved it.”
— Audrey Niffenegger, author of The Time Traveler’s Wife and Her Fearful Symmetry

“The Brothers Grimm gave us the fairy tales; many years later Tanith Lee gave us ‘Tales From the Sisters Grimmer.’ In this astonishing debut, Ms. Fine bids fair to be the Sister Grimmest.”
— Tom Shippey, Wall Street Journal

“A hypnotizing fairy tale that explores what it’s like to live life in an unruly female body that everyone around it insists on controlling, What Should Be Wild pulsates with originality, curiosity, terror, and pleasure.”
— Bustle

“A rich blend of myth and modernity, [and] intricately contrived feminist fantasy, ‘What Should Be Wild’ explores the urges of the body, the nature of desire and the power of the spirit. The novel offers ample portions of adventure, suspense and humor and marks the arrival of a formidable new talent.”
— Michael Berry, San Francisco Chronicle

“A surreally feministic tale…. Enchanting, menacing and darkly humorous, it explores women’s power and powerlessness throughout the ages.  To be tamed and controlled, to be untamed and fierce—and feared.”
— Family Circle

“What Should Be Wild is a Gothic stunner for the 21st century—provocative, luxuriant, unsettling. Prepare to be mesmerized.”
— Leni Zumas, author of Red Clocks

“Without hyperbole, it’s one of the best debut novels I’ve ever read.”
— Chicago Magazine

“A wonderful addition to that genre of lyrical, poetic fantasies, akin to fairy tales in their delicacy and adjacency to the real world.”
— Elena Nicolaou, Refinery 29

“Julia Fine’s elegant prose and quick-paced storytelling cause the pages to fly by, and you’ll still be reliving each moment to trace what was real for quite some time to come.”
— Popsugar

“Julia Fine’s dynamic new novel What Should Be Wild is a darkly comic tale with doses of magic and suspense.”
— Southern Living

“Julia Fine is an exciting, excellent writer. And her voice, in What Should Be Wild, says, unspoken, what we all want so badly to hear when we pick up a new book: Let me tell you a story... one you won’t want to end.”
— Josh Malerman, author of Bird Box and Black Mad Wheel

“Has all the ingredients of a Gothic fairy tale, but expounds upon them in fantastic and modern ways. It’s gorgeous and exhilarating… written in stunning prose, with an urgency that demands the fullest attention, not unlike the magical fiction of Karen Russell or Helene Wecker.”
— Sara Cutaia, Chicago Review of Books

“A captivating tale that explores the fears, desires and mysteries of growing up…. Fine begins with elements we all recognize… and delightfully warps them until a new tale emerges. Maisie is a complex heroine worthy of the story’s luxurious prose…. Fine [has a] gift for walking the tightrope between the universal truths of human experience and the hidden magic within those truths.”
— Matthew Jackson, BookPage

“A debut novel spins a fairy tale about the power and terror of female desire…. Fine has written an old-fashioned book with contemporary resonances… everything from the setting to the elegantly formal prose seems lifted from a 19th-century fairy tale…. The poise and skill with which the story unfolds is an undeniable pleasure.”
— Kirkus

“What Should Be Wild is a grim, beautiful book that you won’t be able to put down. It’s a thrilling fairytale that will give you the chills, will make you wonder what’s really hidden in the forest. Julia Fine writes with enormous imagination, and her first novel is a feast.”
— Annie Hartnett, author of Rabbit Cake

“A first-time novelist of exceptional imagination… Fine offers a provocative fairy tale about womanhood under siege and one young woman’s fierce resistance… with convincing intensity and a charming mix of wit, gruesomeness, magic, and romance in the spellbinding mode of Alice Hoffman.”
— Booklist

“Julia Fine’s bewitching debut is a crackling contemporary fairytale that explores the cost of being extraordinary in a world that asks women to suppress their strength. Fine possesses an astonishing talent as a storyteller. I couldn’t stop reading until every last secret of the forest had been revealed.”
— Sara Flannery Murphy, author of The Possessions

“What Should Be Wild is a dark, glorious fairytale and a grand adventure. Blending magical realism and riveting storytelling, Ms. Fine knows how to cast a spell over her readers. I was captivated by this book from the first page, and its characters are firmly imprinted on my heart.”
— Jennie Melamed, author of Gather the Daughters

END_OF_DOCUMENT_TOKEN_TO_BE_REPLACED

This feature require that you enable JavaScript in your browser.
END_OF_DOCUMENT_TOKEN_TO_BE_REPLACED

This feature require that you enable JavaScript in your browser.
END_OF_DOCUMENT_TOKEN_TO_BE_REPLACED

This feature require that you enable JavaScript in your browser.
END_OF_DOCUMENT_TOKEN_TO_BE_REPLACED