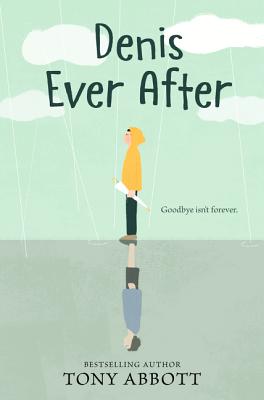 By Tony Abbott
$16.99
Email or call for price/availability

Denis is dead. Well, he’s supposed to be but his twin brother, Matt, is keeping him from fully moving to the great beyond. Denis was murdered and Matt is consumed with trying to solve the case surrounding his brother’s mysterious end. Denis wants only to rest peacefully, but when he returns to earth to tell this to Matt, he gets sucked into the secrets his family has buried. Heavy and moving but still funny, Denis Ever After is a thrilling tale of family, love, and why not all sleeping dogs should be left to lie.

Written by award-winning author Tony Abbott and perfect for fans of The Ethan I Was Before and The Thing About Jellyfish, this bittersweet middle grade novel follows the ghost of Denis Egan as he teams up with his living twin brother to solve the mystery of his death.

He’s okay with that. It’s been five years since he died, and the place where souls go is actually pretty nice. Sure, there are some things about his life and how it ended he can’t quite recall, but that’s how it’s supposed to be. Remembering could prevent Denis from moving on to whatever’s next.

However, something is standing in his way. His twin brother Matt can’t let go of him, and as long as the living are holding on to his memory, Denis can’t rest in peace.

To uncover the truth about what happened that day five years before, Denis returns to his hometown and teams up with Matt. But visiting for too long has painful consequences for Denis, and Matt’s renewed interest in his brother’s passing is driving a wedge between his still-grieving parents.

Can the two boys solve the mystery of Denis’s death without breaking apart the family he’s left behind?

Tony Abbott is the author of over a hundred books for young readers, including the bestseling series the Secrets of Droon and the Copernicus Legacy and the novels Firegirl and The Summer of Owen Todd. Tony has worked in libraries, in bookstores, and in a publishing company and has taught creative writing. He has two grown daughters and lives in Connecticut with his wife and two dogs. You can visit him online at www.tonyabottbooks.com.

“Abbott steadily guides readers through a dark quagmire of questions, anger, and fraying family bonds that are nevertheless held together by love. Surprising twists and turns braid the story’s disparate parts into a revelatory whole that brings healing to its characters and won’t be forgotten by its readers anytime soon.” — Booklist (starred review)

“Luminous and revelatory. A riveting mystery that I couldn’t put down for the life (or death) of me.” — Lauren Myracle, New York Times bestselling author of the Wishing Day series

“A brutally moving and deeply layered story full of heart and hope.” — Leslie Connor, award-winning author of All Rise for the Honorable Perry T. Cook

“Witty, suspenseful and full of hope, Denis Ever After fearlessly travels into the dark mysteries of life, the afterlife and the spaces in between.” — Shelf Awareness

“A taut and twisted murder mystery with a profound reflection on grief and learning to move on. Denis comes to see the “thousand, thousand threads” that bind people and realizes that the powerful connections forged through love cannot be broken, even in death.” — Publishers Weekly

“Abbott keeps the tension high and the mystery dark and unsettling, leavening it with several flashes of humor and intriguing imaginative speculation about the dead. Page-turning.” — Kirkus Reviews

Praise for Tony Abbott: “A touching story of friendship that is easy to read yet hard to forget.” — School Library Journal

“Full of mystery and intrigue, this book had me completely transfixed.” — Ridley Pearson, New York Times bestselling author of the Kingdom Keepers series

“The book is so enticing that readers will go along even when the going is rough.” — Booklist

“With its portrayal of a family on the verge of falling apart following the death of a child and the young person’s narration from the afterlife, this suggests The Lovely Bones shaped for a younger audience…the story is handled with remarkable grace.” — Bulletin of the Center for Children’s Books

This feature require that you enable JavaScript in your browser.
END_OF_DOCUMENT_TOKEN_TO_BE_REPLACED

This feature require that you enable JavaScript in your browser.
END_OF_DOCUMENT_TOKEN_TO_BE_REPLACED

This feature require that you enable JavaScript in your browser.
END_OF_DOCUMENT_TOKEN_TO_BE_REPLACED