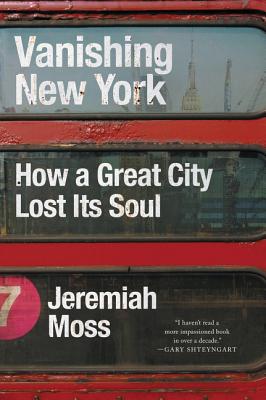 By Jeremiah Moss
$28.99
Email or call for price/availability

An unflinching chronicle of gentrification in the twenty-first century and a love letter to lost New York by the creator of the popular and incendiary blog Vanishing New York.

For generations, New York City has been a mecca for artists, writers, and other hopefuls longing to be part of its rich cultural exchange and unique social fabric. But today, modern gentrification is transforming the city from an exceptional, iconoclastic metropolis into a suburbanized luxury zone with a price tag only the one percent can afford.

A Jane Jacobs for the digital age, blogger and cultural commentator Jeremiah Moss has emerged as one of the most outspoken and celebrated critics of this dramatic shift. In Vanishing New York, he reports on the city’s development in the twenty-first century, a period of "hyper-gentrification" that has resulted in the shocking transformation of beloved neighborhoods and the loss of treasured unofficial landmarks. In prose that the Village Voice has called a "mixture of snark, sorrow, poeticism, and lyric wit," Moss leads us on a colorful guided tour of the most changed parts of town—from the Lower East Side and Chelsea to Harlem and Williamsburg—lovingly eulogizing iconic institutions as they’re replaced with soulless upscale boutiques, luxury condo towers, and suburban chains.

Propelled by Moss’ hard-hitting, cantankerous style, Vanishing New York is a staggering examination of contemporary "urban renewal" and its repercussions—not only for New Yorkers, but for all of America and the world.

Jeremiah Moss, creator of the award-winning blog Vanishing New York, is the pen name of Griffin Hansbury. His writing on the city has appeared in the New York Times, the New York Daily News, and online for The New Yorker and The Paris Review. As Hansbury, he is the author of The Nostalgist, a novel, and works as a psychoanalyst in private practice in New York City.

“I haven’t read a more impassioned book in over a decade. Vanishing New York is angry, incredulous, but also full of insight into a city of legend, where every legend happened to be true.” — Gary Shteyngart

“Jeremiah Moss came to the party that is New York City just in time to see it turn into a wake.His book is lucid, eloquent, phenomenally detailed, and terribly sad. Future generations, assuming there are any, will read it in wonder and disbelief.” — Luc Sante

“Meticulously researched, thoroughly reported, at once a call to arms and a soul cry, Vanishing New York is a love letter to originality and the human spirit. Grab a knish and settle in.” — Charles Bock, New York Times bestselling author of Alice and Oliver

“A vigorous, righteously indignant book that would do Jane Jacobs proud.” — Kirkus

“One of the most thorough and pugnacious chroniclers of New York’s blandification.” — The Atlantic

“A vigorous, righteously indignant book that would do Jane Jacobs proud.” — Kirkus Reviews

“For those of us who’ve watched hopelessly as our beautiful city has turned into an assortment of Duane Reades and Starbucks, this book is a must-read. Jeremiah Moss bears witness on our behalf, and puts it all into brilliant perspective.” — Andy Cohen, host and executive producer, “Watch What Happens Live With Andy Cohen”

“A wrenching, exhaustive chronicle of the ‘hypergentrification of New York’ [. . .] Every page is charged with Moss’s deep love of New York. It is both a vital and unequivocally depressing read.” — The Village Voice

This feature require that you enable JavaScript in your browser.
END_OF_DOCUMENT_TOKEN_TO_BE_REPLACED

This feature require that you enable JavaScript in your browser.
END_OF_DOCUMENT_TOKEN_TO_BE_REPLACED

This feature require that you enable JavaScript in your browser.
END_OF_DOCUMENT_TOKEN_TO_BE_REPLACED