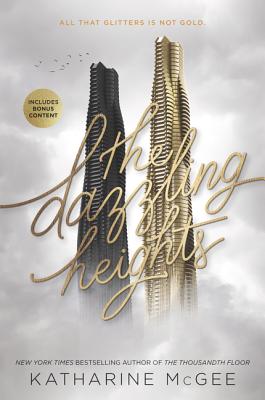 This is book number 2 in the Thousandth Floor series.

This edition includes a bonus prequel chapter and a sneak peek at the final book in the series, The Towering Sky!

New York, 2118. Manhattan is home to a thousand-story supertower, a breathtaking marvel that touches the sky. But amidst high-tech luxury and futuristic glamour, five teenagers are keeping dangerous secrets…

LEDA is haunted by memories of what happened on the worst night of her life. She’ll do anything to make sure the truth stays hidden—even if it means trusting her enemy.

WATT just wants to put everything behind him…until Leda forces him to start hacking again. Will he do what it takes to be free of her for good?

When RYLIN wins a scholarship to an upper-floor school, her life transforms overnight. But being there means seeing the boy whose heart she broke, and who broke hers in return.

AVERY is tormented by her love for the one person in the world she can never have. She’s desperate to be with him… no matter the cost.

And then there’s CALLIOPE, the mysterious, bohemian beauty who arrives in New York determined to cause a stir. And she knows exactly where to begin.

But unbeknownst to them all, someone is watching their every move, someone with revenge in mind. And in a world of such dazzling heights, just one wrong step can mean a devastating fall.

Perfect for fans of One of Us Is Lying and Big Little Lies, the sumptuous second book in the bestselling Thousandth Floor series has all the drama, romance and hidden secrets that landed the first book in this series at #2 on the New York Times bestseller list!

Katharine McGee is from Houston, Texas. She studied English and French literature at Princeton and has an MBA from Stanford. It was during her years living in a second-floor apartment in New York City that she kept daydreaming about skyscrapers . . . and then she started writing. She now lives in Philadelphia. The Thousandth Floor is her first novel and The Dazzling Heights her second.

“Swift and entertaining. With plentiful chapter hooks and lots of action, this is a great choice for a beach read.”
— Booklist Online

Praise for THE THOUSANDTH FLOOR: “The luxe lives of Manhattan’s elite are even more extraordinary in Katharine McGee’s futuristic, highly addictive page-turner. The Thousandth Floor will give you vertigo and leave you eager for more.”
— Cecily von Ziegesar, #1 New York Times bestselling author of Gossip Girl

Praise for THE THOUSANDTH FLOOR: “A gleaming future where a dirty secret still has pull on any human heart.”
— Anna Godbersen, New York Times bestselling author of The Luxe

Praise for THE THOUSANDTH FLOOR: “Compelling and imaginative - I loved everything from the fascinating vision of the future to the scandalous lives of the characters.”
— Amy Tintera, author of Ruined

Praise for THE THOUSANDTH FLOOR: “A confident debut, replete with romance, jealousy, and enticing future fashions and tech, McGee’s story delivers more than enough drama and excitement to hook readers and leave them anticipating the next book in the trilogy.”
— Publishers Weekly

Praise for THE THOUSANDTH FLOOR: “A clever construction, readers who love uncovering scandalous secrets will find themselves staying up late. This is a towering debut.”
— Booklist

Praise for THE THOUSANDTH FLOOR: “This will be gobbled up by fans of “Gossip Girl”. An excellent hook and familiar tropes make this title a likely hit.”
— ALA School Library Journal

Praise for THE THOUSANDTH FLOOR: “McGee has done her work in world building and character development to make a juicy, memorable future that readers will want to revisit.”
— Bulletin of the Center for Children’s Books

“The Thousandth Floor’s dizzying sequel is Gossip Girl set in the year 2118 — only juicier. Throw (in) a cast of criminally hot teenagers, mind-bending tech, and a tantalizing forbidden romance... and you get The Dazzling Heights.”
— -Seventeen.com

This feature require that you enable JavaScript in your browser.
END_OF_DOCUMENT_TOKEN_TO_BE_REPLACED

This feature require that you enable JavaScript in your browser.
END_OF_DOCUMENT_TOKEN_TO_BE_REPLACED

This feature require that you enable JavaScript in your browser.
END_OF_DOCUMENT_TOKEN_TO_BE_REPLACED