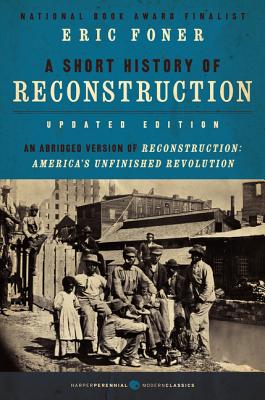 From the “preeminent historian of Reconstruction” (New York Times Book Review), an updated abridged edition of Reconstruction, the prize-winning classic work on the post-Civil War period which shaped modern America.

Reconstruction chronicles the way in which Americans—black and white—responded to the unprecedented changes unleashed by the war and the end of slavery. It addresses the quest of emancipated slaves’ searching for economic autonomy and equal citizenship, and describes the remodeling of Southern society; the evolution of racial attitudes and patterns of race relations; and the emergence of a national state possessing vastly expanded authority and one committed, for a time, to the principle of equal rights for all Americans.

This “masterful treatment of one of the most complex periods of American history” (New Republic) remains the standard work on the wrenching post-Civil War period—an era whose legacy still reverberates in the United States today.

“Eric Foner has put together this terrible story with greater cogency and power, I believe, than has been brought to the subject heretofore. He avoids ideological skids, freeloading hindsight, and mirages of certitude….. Foner’s book brings to distinguished fruition one great cycle of Reconstruction historiography.” — New York Review of Books

“A heroic synthesis that should dominate the field-much like C. Vann Woodward’s interpretation of the new South. It gives nearly equal time to all the protagonists in the Reconstruction drama and recognizes how inextricably economic, political, social, and ideological issues are bound.” — Washington Post Book World

“A remarkable clarity is one of the many beauties of this book that dwells on so many conflicts and ambiguities.” — Boston Globe

This feature require that you enable JavaScript in your browser.
END_OF_DOCUMENT_TOKEN_TO_BE_REPLACED

This feature require that you enable JavaScript in your browser.
END_OF_DOCUMENT_TOKEN_TO_BE_REPLACED

This feature require that you enable JavaScript in your browser.
END_OF_DOCUMENT_TOKEN_TO_BE_REPLACED