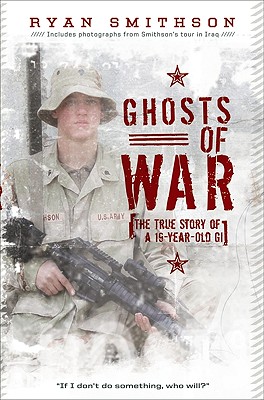 By Ryan Smithson
$10.99
Email or call for price/availability

In this extraordinary and harrowing memoir, follow one GI’s tour of duty as Ryan Smithson brings readers inside a world that few understand.

This is no ordinary teenager’s story. Instead of opting for college life, Ryan Smithson joined the Army Reserve when he was seventeen. Two years later, he was deployed to Iraq as an Army engineer.

His story—and the stories of thousands of other soldiers—is nothing like what you see on CNN or read about in the New York Times. This unforgettable story about combat, friendship, fear, and a soldier’s commitment to his country peels back the curtain on the realities of war in a story all Americans should read.

Ryan Smithson joined the Army Reserve and was deployed to Iraq as an engineer at the age of nineteen. Upon returning, he earned an AAS degree in criminal justice. Specialist Smithson doesn't know if he'll be deployed again. He currently works for the American Red Cross as a mobile unit assistant and lives with his wife in upstate New York.

He lucidly recounts the intensity of battle and the pain of losing comrades. For Smithson, the war is a source of personal enlightenment, and this memoir is a remarkable, deeply penetrating read that will compel teens to reflect on their own thoughts about duty, patriotism and sacrifice. (Memoir. YA) — Kirkus Reviews (starred review)

Smithson avoids writing either prowar propaganda or an antimilitary polemic, providing instead a fascinating, often humorous-and occasionally devastating-account of the motivations and life of a contemporary soldier. — Publishers Weekly

This feature require that you enable JavaScript in your browser.
END_OF_DOCUMENT_TOKEN_TO_BE_REPLACED

This feature require that you enable JavaScript in your browser.
END_OF_DOCUMENT_TOKEN_TO_BE_REPLACED

This feature require that you enable JavaScript in your browser.
END_OF_DOCUMENT_TOKEN_TO_BE_REPLACED